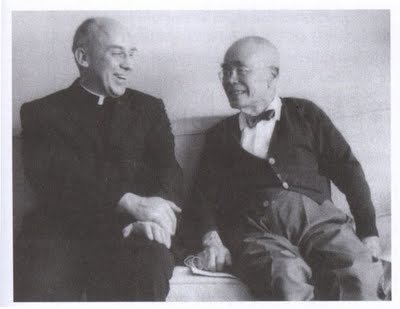 Christian Kindness On The Road To Nirvana

I would not have received the Buddhist training that I did over these past thirty years if it had not been for the love and compassion of two Catholic priests.  In 1982, a friend of mine fished me out of a house where I had been living with ten other people.   That one act of compassion took me away from a life of drugs, alcohol and depression and put my feet on the path of a most remarkable journey.  Within months, I had stopped drinking, smoking, consuming sugar or caffeine and I started meditating and running five miles a day.  The transformation was incredible.  I was happy again.

During those days, my friend and I lived on the third floor of what used to be the Governor’s Mansion in Kalamazoo, Michigan when it had been the state capital back in the 1840s.  It was a magical place.  Every Tuesday night we had friends over to play cards, Euchre, to be precise, and one of these people was a man named Dick Illiard.  One night as we were enjoying ourselves and exchanging banter across the table, I happened to make an off-color remark laced with an obscenity or two.  One of my friends, a psychologist, made the off-handed remark, “you should not use such language in front of Father Dick”.  I thought he was being sarcastic which prompted me to make a second off-color remark with additional obscenities and the activity at the table came to an abrupt halt.  My psychologist friend looked me straight in the eye and said “it’s true, he’s a priest”.   I turned to Dick, a man with whom I had been playing cards for several months and gazed at him questioningly.  Dick smiled meekly and nodded.  He really was a priest and I was mortified.

As it turned out Father Dick was a professor at Nazareth College in Kalamazoo.  He was of the order called “Croziers”.  He invited me to the rectory for dinner the following weekend whereupon one of his fellow priests showed me his gun collection.  I was confused about father White’s gun collection, but suddenly not confused about Father Illiard.  He was a gentle man suffering from Multiple Sclerosis and did not have a mean bone in his body or a harmful thought on his mind.  When I had begun my litany of apologies at the card table he simply smiled and said that he never played cards wearing his habit and apologized to me for not having properly introducing himself to me when we first met.  It seemed that he just liked being one of the guys from time to time.

Weeks after my visit to the Rectory, I happened to run into Father Dick at a restaurant.  He was having dinner with a nun and this time, he was wearing his habit.  I stopped by his table to say hello and apologized once again for my rude behavior and told him that I had been coming off of a hard time in my life.  I told him that I had been meditating lately and that it was really helping to calm my mind.  He said something to me that has stuck with me over these thirty years: “perhaps meditation is your path and you should pursue it”.  I was taken aback.  I had told him that I had been reading Lao Tzu and that it seemed to make much more sense to me than Christianity did.  He replied, “then you should definitely follow that, it will help you.”  The nun with him smiled and nodded in agreement.  It was an amazing moment for me.  I was struggling with my Christian heritage and here was a priest telling me, as if granting permission for Jesus himself, to follow my heart.  It was one of the kindest things a person has ever said to me.\

A few months later, I came across a remarkable book: Thomas Merton’s The Way of Chuang Tzu.  I had no idea who Thomas Merton was at the time, but his book was incredible.  Most of the books I had read about Buddhism or Taoism were translations from Chinese and they were simply out of my cultural context.  But this book was different.  This book was written by a Westerner and it spoke to me deeply.  I started to understand the delusion of dualistic thinking and began to hunger to know more.  When I finished the book, I read the preface being one of those readers who skips prefaces and jumps straight into the guts of a volume.  I was stunned to find out that Thomas Merton was actually a Catholic monk of the Trappist order.  This boggled my mind.  In the preface, it became clear that Merton had received considerable criticism for writing a book about a Taoist patriarch and had been accused of having lost his faith.  In the preface, Brother Merton defended the book and declared his Christian faith loudly without denying the value of Chuang Tzu.  His courage and clarity dazzled me.   This declaration blew the chains off of my mind.  This was free thinking.  This was a deeply spiritual man who declined to let the organization of his faith defile his faith.

Since that time, I have studied Buddhism intently.  In 1994 I met my master, Lama Lodu, and finally got the real training I was thirsting for all those years.  In 1998, I started a Kagyu Buddhist congregation in St. Louis and helped found the multi-ethnic St. Louis Buddhist Council that is still in operation to this day.  I have spent hundreds of hours in retreats and entered a program to train as lama in 2001.  After two and a half years I had to drop out of the program because I simply could not work and raise two children and practice Buddhist meditation four to six hours a day.  I continued my training when I could wandering off to the monastery for weeks at time.  It has been the best thing that ever happened to me.

I think about Father Dick Illiard frequently.  I think about the pure compassion that he showed me when he cared so deeply about my condition that he set aside his own religious views to simply help me.  It was an act of pure kindness.  There was no sectarian posturing or didactic Bible thumping.  He was a pure man with a pure heart committed to relieving suffering  – at that moment, my suffering.  I have since learned more about Thomas Merton.  I have read Thich Nhat Hanh’s account of how it came to be that a statue of Jesus sits on the shrine at his very Buddhist hermitage and how this most venerated of Buddhist monks considers Jesus to be part of his “spiritual heritage”.  His famous friendship with Thomas Merton appears to have been a two-way street.  I am stunned by the photographs from the 1960s that show these two men with some of the most venerated spiritual leaders of their day.   Thomas Merton was photographed with a young Dalai Lama in 1968.   Thich Nhat Hanh was photographed with Martin Luther King in 1964.  They all knew each other, these remarkable people of conscience.  They stopped a war.  They destroyed laws that sanctioned racism.  The walked with thunder, these simple people of compassion.

I grew up to be a man of conscience with healthy children of conscience because of Catholic priests.  I grew up to understand that compassion is the door to empathy and empathy is the great healing force of the universe because of a African American preacher from Georgia who was inspired by a Hindu from India.   I have learned to listen to wisdom and not dogma.  I have learned that if a guy tells you that divine truth authorizes hate,  that he is a liar and a fraud.  I have learned that there are many paths to the top of Mount Fuji, but they arrive at the same summit and if anyone tells you otherwise they peddling something that bears the seeds of great evil and is a desperately shallow person of no apparent wisdom.

I believe in the power of compassion and I believe that ultimate forces of the universe has nothing to do with the fantastic dogma of primitive people who did not understand their sages.   I have tested the power of compassion in my own experience as directed by my Lord Buddha who has warned his students not to accept anything as true until it can be experienced first-hand.   I have seen its transformational force.  I know that every problem facing the human race can be resolved by loving kindness and a receptive mind.  I know that every evil is perpetrated by self-concern, ignorance and hate.   I know that human beings are largely blind to this simple truth.  I know these things because of an army of thoughtful Christian priests and preachers, Hindu wise men and Buddhist lamas who devoted their lives to showing me because their caring was real and authentic.

One by one, all of these people of great compassion come into our world and are gone in a flash.  They are messengers of a truth that resonates at a molecular level in my being and the being of millions like me.  It is time for us, all of us, the army of the loving, to fill the space of human consciousness and drive out the selfish thinking, the misguided feelings of hate and its shallow rational justifications.   Compassion is not dogma, it is a choice.